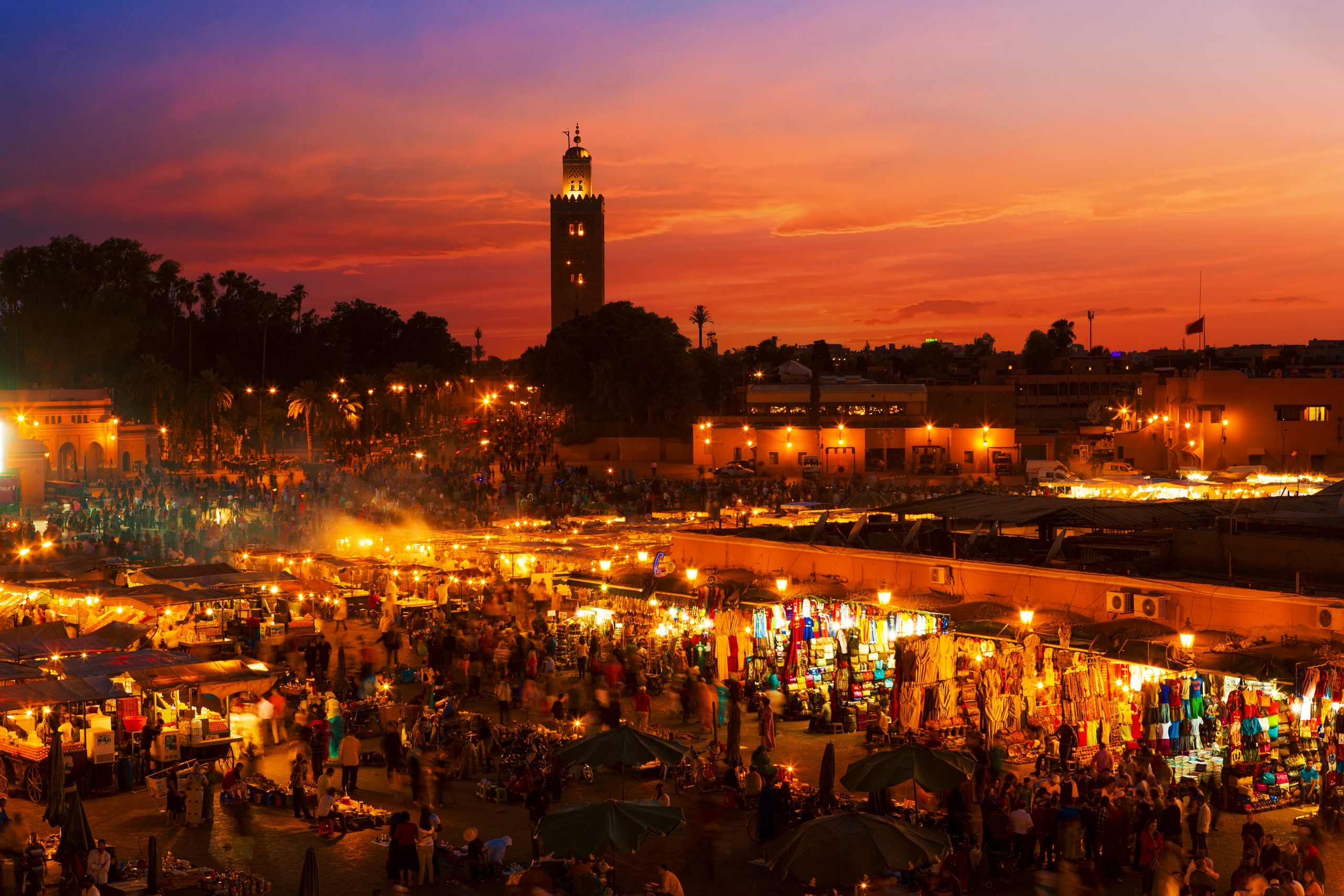 Essaouira is a serene coastal city with a distinctly European vibe. Once under French protectorate, which led to a fusion of cultures and architectural styles, it saw hippies, musicians, and travelers of the 1960’s moving into the city. As a result, it became accustomed to foreigners, and is now a destination city for travelers wanting to spend some time wandering around the beautiful medina. Essaouira boasts pretty, sandy beaches, but the strong winds make sunbathing out of the question. Water-sports fans know the benefit of the wind, however, and meet up on Essaouira’s beaches in the summer months to practice their windsurfing skills.

One of Morocco’s four Imperial Cities, Marrakech has been a key trading hub for many years. The city’s position is integral to the trade of goods into the country, and its focus on trading has shaped the city. Take a look at the iconic Koutoubia Mosque, which dates back to the 12th Century and is an iconic symbol of the old town – the exquisite 19th Century Bahia Palace also stands out for its lavish design. Marrakech is a busy and hectic city. The main market place, Jemaa el-Fnaa in the city’s medina, is a hot and cramped experience for most people. Everything and anything is on sale, from monkeys to musical instruments. Traders call out to customers to heckle and entice – bartering for goods is the norm. As night falls, the main square changes and gives way to steaming food stalls. Though it doesn’t seem possible, the city becomes even more of an animated, dynamic and exuberant travel experience.

Once the capital of the Kingdom of Morocco, Fez exudes culture and history. Well-known for its famous small, red hats, the city also has many compelling sites to take in. Fez’s emblematic medina is a huge pedestrianized sprawl that oozes ambience and history. It can seem completely overwhelming to many visitors, whilst others fall in love with the ebullient atmosphere. Those who are brave enough to wander down the narrow alleys can discover the city’s two Islamic schools or madrasa. Dating back to the 14 Century, Bou Inania and Al Attarine have intricate faces carved from cedar as well as elaborate tiles. The 11th Century Chouara Tannery is one of the oldest in the world and has been making leathers for traders for many generations – make sure to look out for it in the bustling marketplace.

The Moroccan capital of Rabat sits on the banks of the Bouregreg River. It is famous for its incredible Islamic architecture. The city also has strong ties to its French past and – as it lies on the Atlantic coast – has a distinctly European coastal town atmosphere. Rabat’s kasbah is ensconced in the fortified center of the town. It is a fantastic spot to sit and soak up the atmosphere. Take a stroll to St. Peter’s Cathedral and soak in its strange and surreal art-deco style – then enjoy a nice cup of refreshing mint tea at one of the numerous cafes.

Dating back to the 11th Century, the old city of Meknes was once the capital of imperial Morocco. The Sultan at the time developed the city, building high walls and huge doors to protect it, and creating elaborate and ornate Moorish-Spanish-style buildings. The city’s historic blend of European and Islamic design can be seen in its many monuments. The mosaic tiled Bab Mansour Leleuj, as well as the Bab Mansour Leleuj, are stunningly beautiful. The mausoleum to Sultan Moulay Ismaïl – who made Meknes his capital – is a regal display of power, with fountains and decorative gardens.

The gateway to the Sahara Desert, Ouarzazate sits to the south of the High Atlas Mountains. This small and dusty desert city is dominated by the colossal Taourirt Kasbah, a 19th Century fortified palace. The palace boasts amazing views across the mountainous, red landscape. In fact, it is so distinct that has been used in many movies. The city itself has many options for hotels and small, reasonably priced local restaurants to enjoy. The position of the city also means that it’s easy to take day trips to nearby sights such as the Ait Benhaddou – an excellently preserved kasbah.